I’m so pleased to welcome Greg Pizzoli to the Nonficiton Nook!

Greg is the Geisel Award winning author and illustrator of funny, spectacularly designed, and visually stunning picture books for very young readers. His first non-fiction picture book, TRICKY VIC, is as slick as his con-artist protagonist. In TRICKY VIC Robert Miller, AKA “Count Victor Lustig,” uses a string of aliases across the world, sells the Eiffel Tower for scrap metal in France, and even cons the infamous Al Capone in Chicago. The sly humor, stunning design, and real world villainy of Robert Miller in TRICKY VIC is sure to thrill young readers.

After reading my interview with Greg, if you still need more convincing, you can sneak a peek at my goodreads review. But if you’ve already been conned, simply add a comment to the interview post to enter to win one of two signed copies of Tricky Vic!

1. Hi Greg! Does your interest in conmen go back to your own childhood? Did you know about Robert Miller before you began to research this book, or did you go hunting for the perfect conman character?

Great question! Like most kids, I was really into the idea of getting away with things. Although I don’t know if I ever even heard the term “con-artist” until high school. But I was always super interested in books that catalogued people like Al Capone, John Dillinger, etc. with a photo and maybe a paragraph about their worst crimes. I ate those up.

I first heard about “Count Victor Lustig” in 2008 or 2009 while in graduate school. I went hunting for nonfiction stories because it seemed like a different kind of challenge than the work I was doing at the time. It took another three years or so and lots of luck before I conned Viking into publishing it. I didn’t find out his real name was Robert Miller until I started researching the book in earnest in 2013.

2. Did you learn anything interesting about Robert Miller that didn’t make it into the book. I’m asking for the grownups in the room. Don’t hold out on us!

The best stuff is in the book! We did very little sanitizing to make the book more “kid-friendly” – a term I despise – and we didn’t hide any of the good stuff.

That being said, some stuff didn’t make it into the book either because the cons weren’t quite as dramatic or the pay-off wasn’t that great. One of the cons we cut was a “trick” where Miller convinced a banker he wanted to buy a bank-owned farm, and through literal sleight-of-hand, switched some envelopes in the banker’s office and walked out with $10,000. That’s impressive to be sure, but it doesn’t showcase the same kind of ingenuity he displayed in his other cons.

I will say that there is a secret* in the book for anyone interested enough to hunt a bit. I think of it as a nice surprise for the readers who really devour the book and want to see Miller from all angles.

*This is a part of the secret brilliance of Greg’s illustration. The pictures can be read just as deeply as the words. I love the spread (shown below) that illustrates the knife fight, because it displays how the book balances the inclusion of real and uncensored details with interesting (but not gruesome) illustrations.

I think it’s great that you picked out the playing card image as a favorite – it’s one of my favorites, too. I had a lot of fun sneaking small details into this book and I think that image in particular speaks to that – for example, Vic as the “joker” card is pretty obvious maybe, but then having the queen be the woman he’s wooing over the poker table, and the jack being the man who slashed his face. Vic’s holding flowers towards the queen and cards towards the jack. Maybe it’s obvious to some people, maybe some people won’t even notice it, but adding little details makes it a lot more fun for me. Oh! And the lipstick on Vic’s card, too, that’s another example.

3. TRICKY VIC strikes me as the kind of book that kids will pass around among themselves, whisper about, maybe even hide (while we all watch them sideways and smile). Do remember any books like this from your childhood?

I love this question! It would be great if readers thought that reading this book meant that they were getting away with something.

But I have to be honest – while I do remember CDs and video games (with profanity or violence) getting passed around as you describe – I don’t remember any books that weren’t fair game.

4. I think school visits with this book are going to be a lot of fun! Do you have anything tricky up your sleeve? Will you be teaching confidence tricks, sleight of hand, making up aliases?

All of those things! Kids are all (or, ok, mostly) natural cons and tricksters anyway, and it will be fun to engage with them in a way that encourages those tendencies – and maybe help kindle some interest in nonfiction that’s different from what they typically see or read.

5. I know you have another nonfiction title in the works, about a jungle explorer—can you tell me anything interesting about that? Like does anyone get eaten by a jaguar, laid up with a mysterious jungle fever, or get lost FOREVER?

Yes! Thanks! I don’t want to give too much away – but yes, another book is in the works – and it’s about an explorer – there are jaguars, anacondas, and cannibals – I’m working on it now and it will hit shelves later next year.

Voila. There you have it folks.

Readers who want to know even more about Greg’s process for creating TRICKY VIC can sneak on over to the Seven Impossible Things blog. Greg says, “My dream for this book—besides, ya know, ten million copies sold—is that some kid who maybe is dreading yet another book report on a goody-goody President “who never told a lie” can pick up Tricky Vic and write a biography of the man who conned Al Capone.” I’m pretty sure this book is going to make Greg’s dream come true in spades (because they are cleverly hidden up his own sleeve).

If you want to win one of two signed copies of TRICKY VIC just add a comment to the interview below. I’ll announce the lucky marks on March 10, 2015. 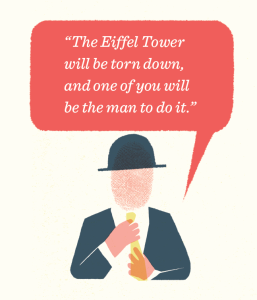 Every year the youth media award announcements feel like The Oscars of children’s literature. I get to root for my favorite books, but I also get to discover new (to me) voices. I was thrilled to see JOSEPHINE and NEIGHBORHOOD SHARKS win Sibert honors. They are both books that play at the edge of scandalous and scary, which I think is a pretty interesting place in picture books. For the next few months I’ll be hunting the shelves for scary, scandalous, odd, and interesting nonfiction. Today I’m bringing you sharks:

Next month I’ll bring you an interview with Greg Pizzoli on his new book, TRICKY VIC. It’s about a mysterious conman who invented over forty-five different aliases, sold the Eiffel tower, and even tricked the notorious mobster Al Capone! What will come after that? Even I don’t know. But I’m excited to find a new book that’s thrilling, impeccably designed, and uniquely illustrated and I bet kid readers will be too!